As we all know the focus of our intention for the summer cruise-in-company was Kinsale and either West Cork or the Scillies.

But – and as is normal – the wind gods played havoc with the best laid plans of sailors and with strong southerlies we ended up, instead of Kinsale and places south, by visiting Skerries, Ardglass and Peel (IoM). But last minute 180 degree changes didn’t take away from a happy and most enjoyable event.

On the way we lost and gained a few boats. Early on we lost one when Epitant pulled into Poolbeg rather than endure the Baily overfalls at their best. Hugh and Gus came with us as far as Peel and then left to go back to Bangor and further engine-driven adventures. In Peel we linked up with Adrigole which had been storm bound for a couple of days.

There was some revelling – but nothing excessive – during stop-offs in Skerries, and excursions in Ardglass and Peel. 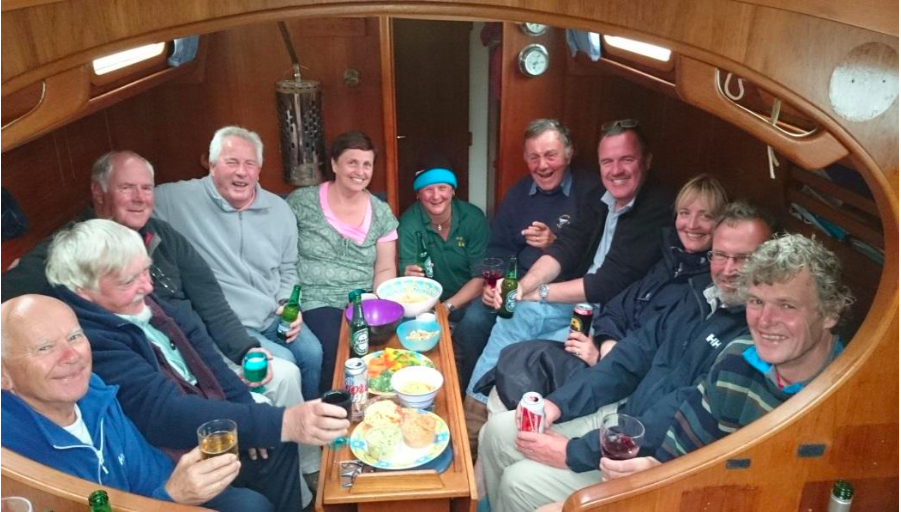 Skerries Sailing Club were generous in allowing access to some vacant moorings, in inviting us to a barbecue laid on for one of their racing class regattas and in ferrying us in and out to the club and Stoop Your Heads and ensuring we got back before sundown. We hope that on some future date
we can reciprocate with a similar provision when they visit us in Dun Laoghaire – hopefully in the not too distant future.

We encountered very strong monsoon-type rain which went through most of our oilskins and equally strong wind conditions; especially on the sail up to Ardglass. It was with some relief we picked up the lighthouse at St John’s point and to know we weren’t far from Ardglass.

Happily we managed to get the main channel buoys right on our way into Ardglass marina. The marina was opened in 1996, with berthing facilities for 83 boats. It is managed by a team of local volunteers and was, as we’ve always found it, helpful with mooring and other advice. Ben the marina manager’s dog was in fine fettle. We were happy again to note that the Chinese restaurant continues to do good business as does Manny’s pub up the road from it.

We went into Downpatrick and visited the grave of the saint as well as the impressive high-tech exhibition of the story of St Patrick. A sad occasion was when ‘Heads’ Keeley had to be left behind in Ardglass to do some urgent refuse removal. Later talking to some of the locals our enthusiasm was somewhat deflated. They appeared to view the exhibition and the building it’s housed in more or less the way Dun Laoghaire locals enthuse about the new library.

In Peel we linked up with Shay on Adrigole where we were mightily entertained. Some caustic individual observed that the photo of the party on Shay’s boat looked more like a picture from an active retirement group. Indeed the presence of the ladies on the cruise ensured lots of genial entertainment. It was great to have them with us. The bikers, young and old were everywhere to be seen even though the Isle of Man TT races were well past. 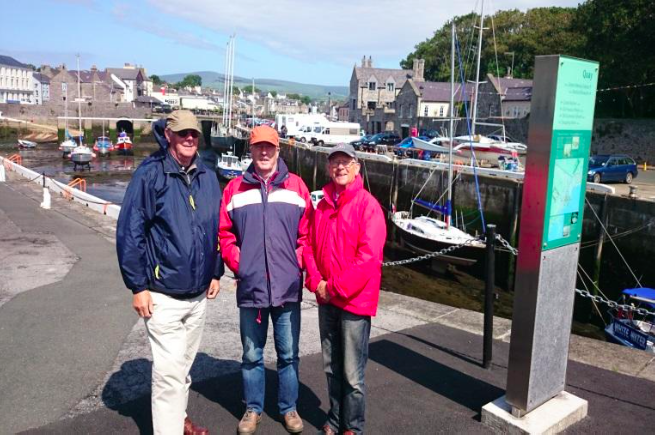 For some of us who thought we knew the island the visit to Castletown the visit by local bus was a first opportunity to visit this little historical gem with its castle and large drying-out harbours. It traces its roots back to 1090. The town has narrow streets and small fishing cottages. Fishing boats still continue to go out to fish from the harbour. Small though it is it was the Manx capital until 1869. The centre of town is dominated by Castle Rushen and its museum which we viewed in some detail.

Coming out of Peel Harbour in a heavy swell at five in the morning with trawlers and yachts milling around – all seeking to take advantage of the calmer weather after several days storm-bound – was exciting as well as impressive. It was necessary to keep clear of the other boats and trawlers while hoisting sail in the confined shelter of the short pier in a North-Westerly wind – very interesting and a little perplexing. 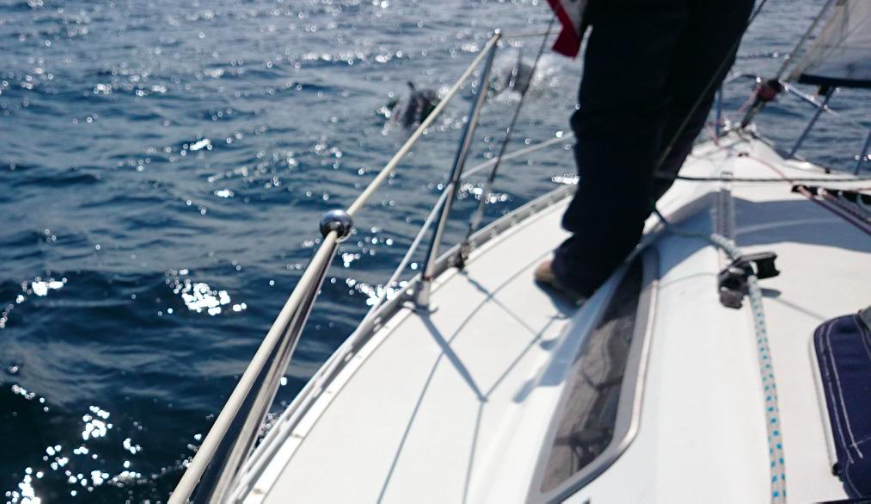 Dolphins on the port bow on way home from Isle of Man. Two pods of eight including young were spotted and stayed playing around the boat for nearly half an hour.

A highlight of the cruise back from Peel was the encounter with two pods of Dolphins which played around Renee for about half an hour in strong weather conditions.

There was a short announcement from Joe that Holyhead was our target. He was going to keep to the west to avoid the forecast of the wind backing to South-west and then South later in the day. The rest of the cruising boats followed accordingly but Wild Goose was soon out of sight. Then at regular intervals over the radio Joe announced a change of course: first to Howth. An hour or so later it was to Malahide and we followed. Finally, it was to Skerries. While we feared that Joe could change again to Carlingford – or even Ardglass again – we all settled for Skerries and the last of us made our landfall at 1930 or fourteen hours after departing Peel.

After Skerries each boat went its separate way but all ultimately reached our home port to live and to chuckle at the numerous little adventures we’d had. Notwithstanding the strong winds it was a hugely enjoyable cruise. One advantage of several boats sailing together is that if a crew drops out it’s possible to replace him with surplus crew from another boat. That happened again this time. It’s proposed we spend another few days sometime in August either sailing to Wales or South to Waterford. There are no firm plans yet.